skip to main | skip to sidebar

Nick and I are down in Puerto Vallarta, Mexico on a weeklong vacation. We both were looking forward to getting away and enjoying some much-needed relaxation time ... I just truly had no idea what a special trip this would be.

Saturday, May 1st was our one year anniversary of meeting and so we made plans to go to dinner somewhere nice. Nick asked if he could plan where we went, so I happily obliged! The day had been overcast, but we still looked forward to celebrating our anniversary even if the views were less than par. We went to Le Kliff, an open-air restaurant overlooking the ocean 30 minutes away. We had a secluded table all by ourselves – it was super romantic. They offered to move us somewhere where we might not get “mist” (i.e. rain) ... but we figured we’d tough it out. It did sprinkle a bit, but I thought it added to the evening. A mariachi band came over and sang a romantic love song to us ... it really was the perfect setting. The sun set right as our main course was served – and it was incredible. A day of clouds and drizzle parted for an amazing orange and red sunset ... we couldn’t ask for anything more.

Below us was a little trail that you could walk along, with scenic views, and I had asked Nick earlier if we could walk down where there were two grass hearts on a stone step. After dinner, he asked if we could go for a walk. I honestly had no idea what was about to happen - we had decided on no anniversary gifts. Although I did put my hand on his chest and his heart was racing ... I figured he might just be nervous about giving an anniversary speech. :) 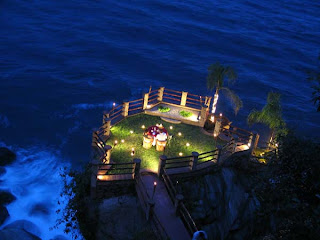 We were standing under the moon and stars, as the waves crashed below us; after a short speech, he went down on one knee and asked me if I would be his wife. I kept saying “Oh my God” over and over ... but did say YES! The mariachi band and restaurant had been watching us and gave us a loud cheer as we kissed our engagement. As we walked back up to our table, we passed another couple who was on a different part of the trail – we totally stole their thunder ... because they got engaged in the same place as we did just a couple minutes later! Nick also stopped to ask and make sure I did say yes, since neither of us could remember just exactly what we had said.

My ring is BEAUTIFUL ... Nick did quite a bit of research and the ring is absolutely perfect – an oval solitaire in a white gold Tiffany setting. He asked my Mom, Stepdad and Dad for their blessings the week before – they were the only people who knew, other than the ladies at the bank and his barber. :)

After getting back from dinner, we made a few phone calls to friends and family to let them know the big news. And we bought a day’s worth of internet access so we could spread the news electronically on Facebook. We went down to the beach and celebrated with cocktails and a cigar for Nick ... we can’t stop smiling. It truly was a magical night - everything I dreamed of when I was a little girl. I have finally found my Prince Charming!

We’re super excited about our future – lots of decisions to make, but for now we’re just taking in our engaged life and looking forward to what lies ahead. Thank you all for your blessings and good wishes – it truly means the world to us. We’re a little obnoxious right now (calling each other fiancée all the time, constant ring gazing, etc.) so it’s probably good we’re on vacation so no one else has to deal with our lovey-doveyness. ;) 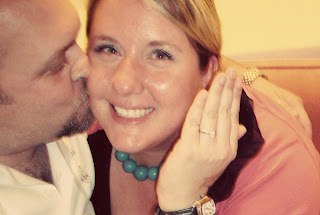 Proud to be a part of: